When I was in High School: Death Angel's Ultraviolence

So I was all over the place when I was in junior high and high school, floating around from friends to friends until I finally settles on two overlapping groups that split once we all gradated (yes there are too many ideas going on in this sentence).  For part of that time I was into heavy metal.  My first concert was Metallica's "And Justice for All" tour, which was their las album before they started sucking.  I saw them at Lake Compounce in Bristol Connecticut when I was in 8th grade.  My two friends and I went and we were the youngest kids there.  Some rocker guy gave me the finger for looking at his girlfriend.  It was scary.  Anyway, this song, ultraviolence, by Death Angel was one of my favorites during this time.  I totally nailed it on my air guitar while I was rocking away in my bedroom instead of doing homework.   Check it out, might be from 1989 or so.

The Brits Talkin Shit about Our Prison System

From the British television show QI (which looks like it's supposed to be a comedy program). The host starts off by giving some stats on incarceration in the U.S. and the guest at first make some jokes, but then they become sort of awe struck at how brutal our prison system is. It's good to see how folks in an international forum view our state of prisons. Thanks to Sociological Images for posting this (and some other stats on prison privatization).

American Zombie has uploaded the video footage from the Community Forum on Prisons held on September 20, 2011.  There's another forum on October 1, 2011.  Here's the video (thanks Zombie).

Here's a great visual representation of the growth of prisons in the U.S. over the past couple centuries.  The green dots represent prison construction from 1778-1900 (122 years).  The yellow dots represent prison construction from 1901-1940 (39 years); orange dots from 1941-1980 (39 years) and the red dots from 1980-2005 (25 years).  The artist does a great job capturing the growth in the prison industry since the Civil Rights movement and the recent War on Drugs.  This is when prison became political and the number of those incarcerated in state and federal prison grew from around 300,000 (early 1970s) to 2.3 million (today). This represents the greatest number and rate of incarceration in the world.  That's right, in the world. China might share the title, depending on measurement.  Further, the U.S. incarceration rate for African Americans is over 2,000 per 100,000--4,919 black men per 100,000 according to the Department of Justice.  This represents a higher incarceration rate than was the case in apartheid South Africa.  Not surprisingly, the growth in incarceration has had virtually no effect on violent crime.  In fact, New Orleans has one of the highest incarceration rates for cities in the world and it's still one of the most violent cities in the U.S.   Check it out, it's about 10:00 minutes long.

Here's a segment from WWNO that was on the radio yesterday (09/22/11) on immigration policing and jailing in New Orleans.  Nationally, immigration detention centers are one of the fastest sectors of the private prison industry.  Click here to listen. 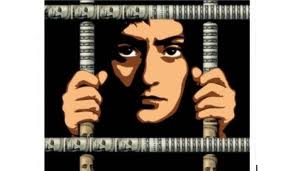 Once a year the magazine The Economist comes out with a yearly booklet called "World in Figures." This booklet lists the world rankings of a number of different areas.  Here's the ranking of employers size by number of employees.  Notice the top dog, this is where much of your federal tax dollars go.  Also, this number does not include veterans benefits (I think that's covered under the Department of the Interior). 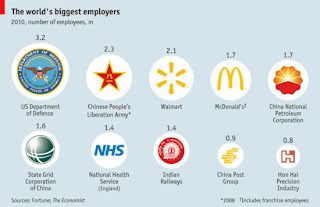 Email ThisBlogThis!Share to TwitterShare to FacebookShare to Pinterest
Labels: Department of Defense

The State of Georgia is preparing to execute Troy Anthony Davis in one of the most high-profile executions in the United States in years. Davis is scheduled to be killed by lethal ejection at 7:00 p.m. EDT, one day after the Georgia Board of Pardons and Paroles rejected clemency. Democracy Now! will air a special broadcast from outside the prison in Jackson, Georgia, from 6:00 p.m. to 8:00 p.m. EDT. Davis was convicted of the 1989 killing of off-duty white police officer Mark MacPhail. Since then, seven of the nine witnesses have recanted their testimony, and there is no physical evidence tying Davis to the crime scene.
Posted by Steve at 12:45 PM No comments:

I'm sure there are some downfalls, but I like the idea of finding different ways to vote and I don't like the fact that my vote is not for who I want, but against who I don't want.  I know this style of voting [instant run-off voting], and others, have been put to use in different cities across the world.  Don't know what the citizens of these places think though, or the likely long-term implications for democracy and decision-making.  I'm just trying to find a way to design a voting system that best reflects the diversity of opinion out there.  I'm sure nothing will be perfect, but this seems like one possibility.  Thoughts and suggestions?

Haven't listened to it, but it looks interesting and worthy of a repost.  Compliments of the folks at Crooks and Liars. Click here for the audio. 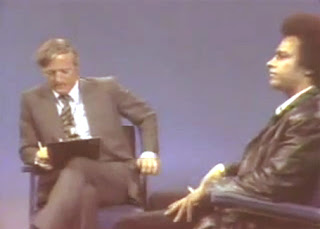 Here's a repost, courtesy of The Lens.  Click Here for the Original (with map) 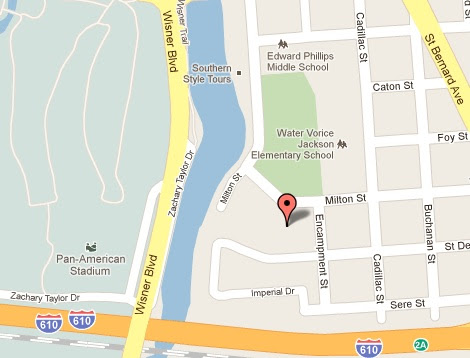 The juvenile jail will remain at a location adjacent to Bayou St. John and the planned home of McDonogh 35 High School.
By Steve Beatty, The Lens staff writer |
Despite concerns from some neighbors, Mayor Mitch Landrieu said this week that the city will rebuild its juvenile jail where it now stands – right across from a city playground and the site of a planned high school in the Bayou St. John area.
Read more »
Posted by Steve at 5:18 AM No comments:

George Carlin on The American Dream

Here's some George Carlin for ya.  Sometimes comedians say it best.

I've been wanting to post something about this for the last day or two, but I just couldn't muster up the energy to do it.  Sometimes learning of things like this is so disheartening that it just sucks the energy out of me, despite how important it is for people to be aware of it.  Political scientists and sociologists have noted for years now that a more engaged citizenry usually translates into more votes for democrats (less so now because of the ideological shift to the right over the past 30-years) and third party candidates.  Political savvy folks know this too.  If more voters threatens your political ideology, and you have no morals or soul then you have a vested interest in decreasing the number of voters.  That's what's going on here.  It's despicable and embarrassing that in the 21st century we have people actively seeking to deny others the right to vote.