From Crooks & Liars:
This is from "Captive Audience: The Telecom Industry and Monopoly Power in the New Gilded Age", a book by Susan Crawford, a former adviser to Obama on science, technology and innovation issues. In this excerpt, she homes in on the monopoly extended by the Comcast/NBC merger:

To those who argued that the merger would stick U.S. consumers with high-priced, homogenized entertainment and second-class Internet access, Comcast had only to respond that the situation for consumers would not be any worse than it already was. If opponents could not decisively prove “merger-specific harms,” the phrase Comcast employees repeated endlessly to staff members across Washington, the deal could not be blocked.


By February 2010, the accepted wisdom in Washington was that the deal would go through. And it showed Americans their Internet future. Even though there are several large cable companies nationwide, each dominates its own regions and can raise prices without fear of being undercut.

Talk show host Rick Smith on Meredith Attwell Baker, the NBC/Comcast merger, and FCC corruption.
Wireless access, dominated by AT&T Inc. (T) and Verizon, is, for its part, too slow to compete with the cable industry’s offerings; mobile wireless services are, rather, complementary. Verizon Wireless’s joint marketing agreement with Comcast, announced in December 2011, made that clear: Competitors don’t offer to sell each other’s products.

It doesn’t have to be this way. Other developed countries have a watchdog to ensure that all their citizens are connected at cheap rates to fiber-optic networks. In South Korea, more than half of households are already connected to fiber lines, and those in Japan and Hong Kong are close behind. In the U.S., only about 7 percent of households have access to fiber, and it costs six times as much as in Hong Kong.

Rather than try to ensure that the U.S. will lead the world in the information age, American politicians have removed all regulation of high-speed Internet access and have allowed steep market consolidation. The cable industry has done its best to foil municipal efforts to provide publicly overseen fiber Internet access. Now, the U.S. has neither a competitive marketplace nor government oversight.

In the subcommittee hearing, Roberts never faltered, and his performance was judged a success. In the end, the Antitrust Division allowed the merger, and the FCC followed suit.

Compared with people in other countries, Americans are paying more for less and leaving many of their fellow citizens behind. Perhaps they will start to care when they see that the U.S. is unable to compete with nations whose industrial policy has been more forward-thinking.

If anyone's looking for more information on the school shootings in Connecticut here are some local sources.  I grew up about an hour and a half from where it happened.  I didn't learn until just recently that one of my older cousins on my dad's side lives in Newtown and has small children enrolled in school there.  I hope they're ok, but don't know yet.

http://danbury.patch.com/ (The Danbury Patch--Danbury is the nearest "city", maybe 20 minutes away)

Update: just found out my cousin did have children in that school (Sandy Hook). One in first grade and the other in second.  They're physically safe, thankfully, but God Damn!
Posted by Steve at 5:26 PM 1 comment:

Michelle Alexander, author of The New Jim Crow and Associate Professor of Law at The Ohio State University's Moritz College of Law, will be giving the Ortique Lecture at Dillard University.  The talk will take place this Wednesday (i.e., tomorrow) at 7pm in the Georges Auditorium.  It's free and open to the public.  Definitely worth seeing.   More information below.

Who's the 1%? It's probably not you or anyone you know.  This if from Cenk Uygur of The Young Turks.  He's a bit annoying, but makes good points. 2:00-2:45 is when he really hits on how most of the 1% aren't taxed around the 30% rate most people are.  Instead they're taxed around 15% because of the different ways they can claim their money.

Here's an article on how we got to this point of wealth/income inequality. Big surprise, both republicans and democrats are [almost] equally guilty.

Here's a discussion with Tavis Smiley and Dr. Cornel West on Obama's record as a progressive, poverty, and other issues related to the latest presidential election.  They also discuss their latest book: "The Rich and the Rest of Us: A Poverty Manifesto."  This is courtesy of Democracy Now!.

Part 2: On Obama and Poverty.

President Obama Tears up as he Thanks his Staff

This is really moving.

Breakdown of the Popular Vote by Precinct 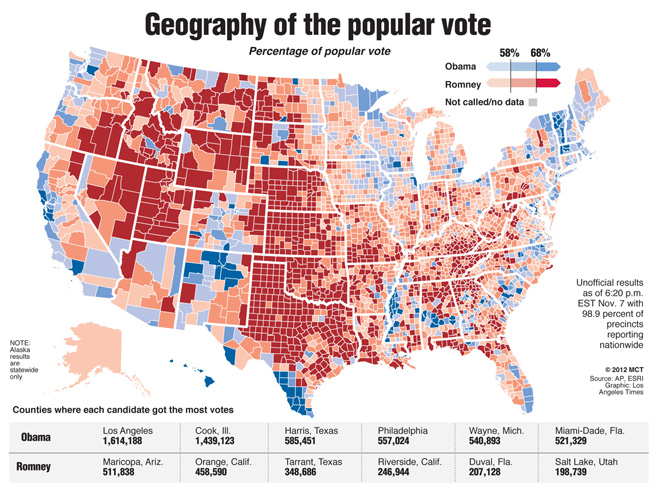 I'm not in the least bit surprised by this.  Courtesy of TalkingPointsMemo. We can critique the source of the study all we want, but lets not pretend that these changes in voting polices don't have any real effect and that it's not random.  Plus, we should pay attention to who's calling for shorter early voting periods. Nobody's gonna support policy that hurts their own parties or groups.  This needs to be fixed.  Plus, I always wondered why election day is not a national holiday.  Seems like it's important enough to warrant time off so we can take care of our civic duties. 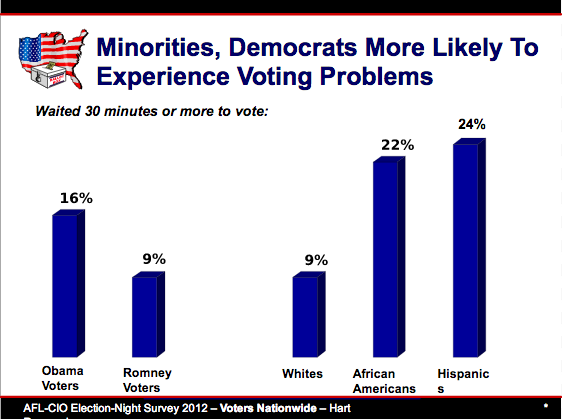 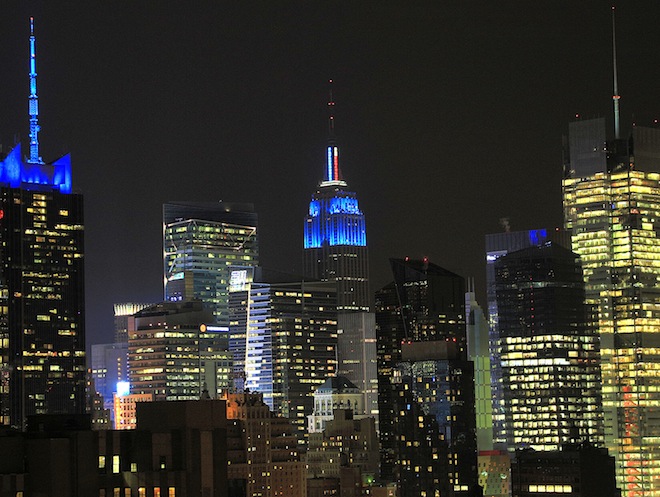 Watch live streaming video from democracynow at livestream.com
Posted by Steve at 5:54 PM No comments:

I attended the symposium on preventing violent crime at Loyal University on Friday.  I planned on attending the whole day, but got caught up having to take care of other responsibilities during the lunch break that took a while.  I listened to the some of the second half of David Kennedy's talk, but unfortunately missed Nikki Jones' talk.  Female crime and violence is an under-studied area of criminology and she's making some good contributions.  I saw Ronal Serpas, Robert Sampson and Karen DeSalvo speak.

I haven't heard many police chiefs speak or address the public, but I get a sense that Serpas does more than most, and he's willing to accept the limitations of policing for solving violent crime way better than most.  There's no doubt room for improvement, but he's pretty good for what's usually the case.  At the beginning of his talk an audience member called out a question on police brutality.  It's a necessary question, and while it was the wrong time to ask such a question it brought up an important issue.  While Serpas didn't answer his question then, during the Q&A period he discussed recent work to create a new form of assessment within the police department that is more closely aligned with the department's goals of better "customer service." This might help address what that questioner yelled out.  Regardless, the question brought up the need of constant oversight of the police department.  Institutions that formally give people power over others, such as the police, are inherently susceptible to abuse and need to be independently monitored.  The city has an independent police monitor, but from what I've heard, she doesn't have much power to do anything.

This is too good to pass up. It's Stephen Colbert's counter offer to Donald Trump's offer to donate money to a charity of Obama's choosing if he releases his college application and records (I'm guessing this means transcripts), and passport records. I post both offers below.

This looks like an amazing event. Some of the leading researchers on crime and violence will be speaking on Friday, October 26th at Loyola University. I cut and pasted the line-up after the break.  Click here to go to the site.

Eugene Jarecki: The War on Drugs

Here's Jon Stewart's interview with Eugene Jarecki on the war on drugs and his new documentary "The House we Live In."

Florence + The Machine: Dog Days are Over

I'm totally hooked on this song right now, like crazy hooked.  I heard it in spin class and then at Cold Stone.  I had to ask the guy behind the counter who sang it.  He told me the band's name, but didn't know the specific song so I hunted it down. Now it's on a constant loop at my place.  My step son is going crazy. I see it as revenge for having to listen to Naruto all the time.

Clemency for Women in Louisiana

This is impressive.  A former student of mine was working on a class project (not for my class) that a number of students wanted to continue when the semester was over.  Their goal is to advocate for women who were victims of domestic abuse, killed their abuser, and then were incarcerated for their actions.  The name of the organization is called Clemency for Women in Louisiana.  They're writing petitions, taking part in demonstrations, and asking Louisiana residents to contact parole boards, representatives and Governor Jindal on the behalf of these women.  Check out their website and see how you can get involved. 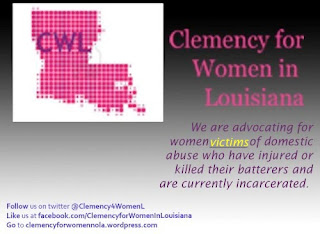 Here's a sample letter they crafter that you can use if you're not sure what to say (below the page break).

These are taken from Crime Solutions.gov which is the research evaluation based branch of the Office of Justice Programs. These are brief summaries of the programs that are effective (thus the V+) and can be implemented in New Orleans to help reduce youth violence.  Crime Solutions also has data on corrections and reentry, courts, drug and substance abuse, law enforcement, victims and victimization, and other areas.  I encourage you to check it out.