Here's a link to wunderground, that give up to date information on hurricane Isaac.
Word out is that it's a very long system (which is bad) and that it's getting organized (which is also bad).

Here's a link to Patrap and hurricane awareness preparedness info.  He's a local blogging at wundeground since Katrina.

Addition:
Here's a link to the National Weather Service's National Hurricane Center.
Posted by Steve at 6:38 PM No comments:

I yanked this off of Zombie's blog. 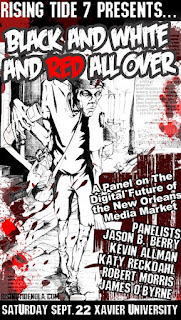 Radical grannies are the best!
Complements of Crooks & Liars.

The Vera Institute of Justice recently released a report examining the mental health needs of those in the Washington DC criminal justice system. Given the lack of mental health services in New Orleans, the relationship between mental health and homelessness, crime and repeat offending, and a growing interest in establishing a mental health municipal court (based on personal communication I know Judge Sens is interested), this report might have something useful to offer this city. I pasted some of the key findings from the report below, and a podcast with one of the key researchers (Richard G. Dudley).  I also created a link to the full report and summary fact sheet.  This might also interest some other local bloggers.  I know my pal Noitsjustme will find this interesting.

Here's a link to the full report: Closing the Gap: Using Criminal Justice and Public Health Data to Improve the Identification of Mental Illness

Here's a link to the summary Fact Sheet.

Some of the basic findings are below the fold.

Crime Prevention in New Orleans: The Value of Community Input

The Rev. Tom Watson's claims are spot on.  I couldn't come up with better solutions myself and I'm a criminologist who knows about the research on crime and violence prevention.  Goes to show you the importance of community input in dealing with violence. After all, who would know better than those on the ground? I'd like to see a lot more of this type of reporting from the big stations, as this is where the real value of the news lies.

From The Louisiana Weekly:

By Mason Harrison
Contributing Writer
Officials at City Hall are facing tough criticism of their plans to fight crime from one of the city’s most ardent backers of community involvement in turning the tide of violence in New Orleans. The Rev. Tom Watson, who recently pulled together a citywide summit on Black-on-Black violence and issued several recommendations to curb crime, says the city’s crime czar and other officials have dropped the ball on incorporating community input into policing strategies.

Watson’s chief complaint pertains to the positive, community-centered “rhetoric” that he says emanates from the office of Mayor Mitch Landrieu, but that is “not meeting the [city’s] action on the ground.” Specifically, Watson says, Landrieu and New Orleans Criminal Justice Commissioner James Carter are willing to provide access to city officials working on crime interdiction to area stakeholders, but are slow to take up recommendations from local leaders.
Read more »
Posted by Steve at 1:59 PM No comments: